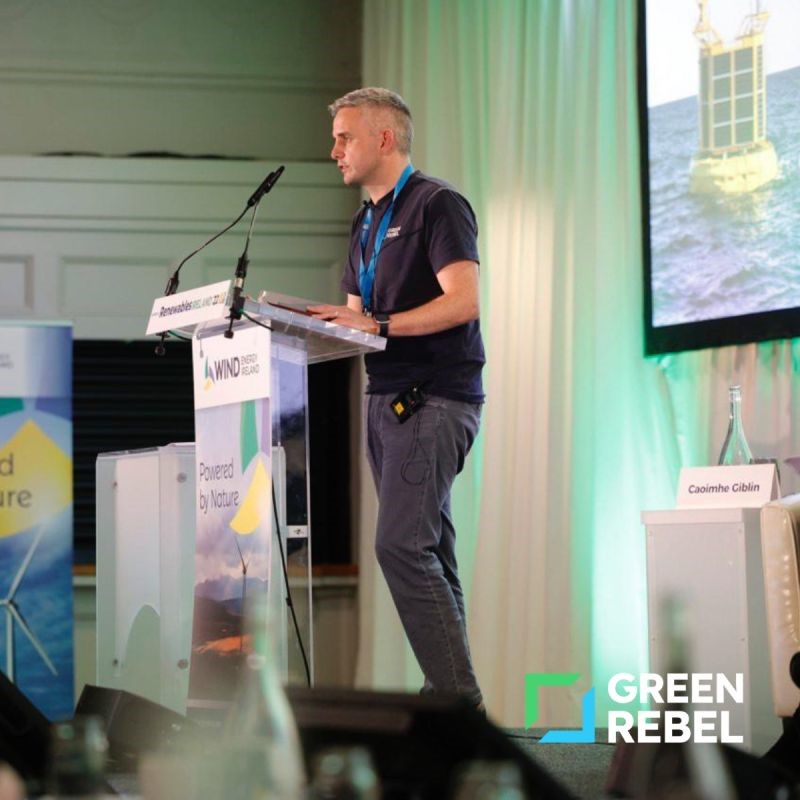 Green Rebel were delighted to sponsor Wind Energy Ireland’s Renewables in Ireland 22 event which was held in Cork on the 9th of November. It was fantastic to hear all about all the interesting work that is on going in the renewables sector in Ireland. It was evident from listening to all the speakers that Ireland has huge potential to be global leaders in such a critical industry. Ireland has over 70 GW of offshore wind that can provide our beautiful island with approximately 8 times the amount we need currently. It is important to note that each GW of offshore wind has the potential to add an additional $2 billion in revenue to the Irish economy. In order for Ireland to harness this incredible resource we must establish an indigenous supply chain that has the capacity to oversee a total energy transition. Moving away from our dependency on fossil fuels will not be an easy task but it is one that we must no longer put off. The decarbonisation of our entire economy must become this countries main priority. If we as a country are able to enact the right policies we can create enormous value both economically and socially.

Ireland’s electricity demand is expected to grow significantly over the coming years, with estimates putting it at circa 30 per cent growth by 2030 and circa 80 per cent growth by 2040. These are remarkable growth rates and some have even stated that these are unsustainable, driven primarily by specific growth in high energy industries such as data centres and electric vehicles. As the government continue to pursue its policy of  continued economic growth through FDI by any means necessary, it has also declared it’s   “80 by 30” target – whereby 80 per cent of electricity will be generated by renewable sources by 2030. An ambitious target based on the Climate Action Plan, this will see current renewable energy generation capacity increase from 4.5 gigawatts (GW) today to circa 15GW by 2030, including 4GW of incremental onshore wind, 5GW of offshore wind and circa 2GW of solar capacity.  Much needs to be done to deliver on these projects alone, but the question is also being asked as to whether Ireland’s offshore wind ambition is big enough, particularly when we look at our counterparts across the Irish Sea.

Green Rebel CEO, Kieran Ivers spoke in the session entitled “Investing in Ireland” where he was joined by a number of other experts including Caoimhe Giblin from ElectroRoute, James Delahunt from KPMG and Peter Cunningham from is Temporis Capital. Kieran spoke about “Realising Ireland’s Economic Ambition” and focused on the importance of having a long-term goal and creating a step-by-step plan with industry and government on how we harness our economic potential from offshore wind in the next decade. Calling on stakeholders to stop limiting Ireland’s potential due to a lack of ambition. Green Rebel provides a case study for the growth potential of the offshore wind industry in Ireland. Ambition and a passion to stimulate the energy transition fueled our success and growth in the last 2 years. In his speech, Kieran quoted Micheál Martin at COP27 when he said “Let us not waste a second more”. The only way we are ever going to reach our ambitious climate targets is if as a country we create a planning system that works for us and not against us.

On the 15th of June, the Joint Committee on Enterprise, Trade and Employment held a meeting to discuss the Offshore …